Pennsylvania Restaurant and Lodging Association Director Ben Fileccia gives his take on the crippling effects that new COVID-19 restrictions will have on the restaurant industry.

According to new data from Los Angeles County’s Department of Public Health, COVID-19 cases traced back to the county’s restaurants and bars accounted for just 3.1%, or 70 of the total 2,257 confirmed cases found from 204 “outbreak” locations.

RESTAURANTS ON LIFE SUPPORT WITH NEW CLOSURES, CURFEWS, AND NO ADDITIONAL STIMULUS

Meanwhile, 7.27% of COVID cases were traced back to government agencies, including L,A. County entities like the Registrar, Fire Department, and Department of Parks and Recreation, among others.

Out of the total confirmed cases, 2,249 of them were traced to staff members at workplaces, food and retail stores while just eight cases came from non-staff members. 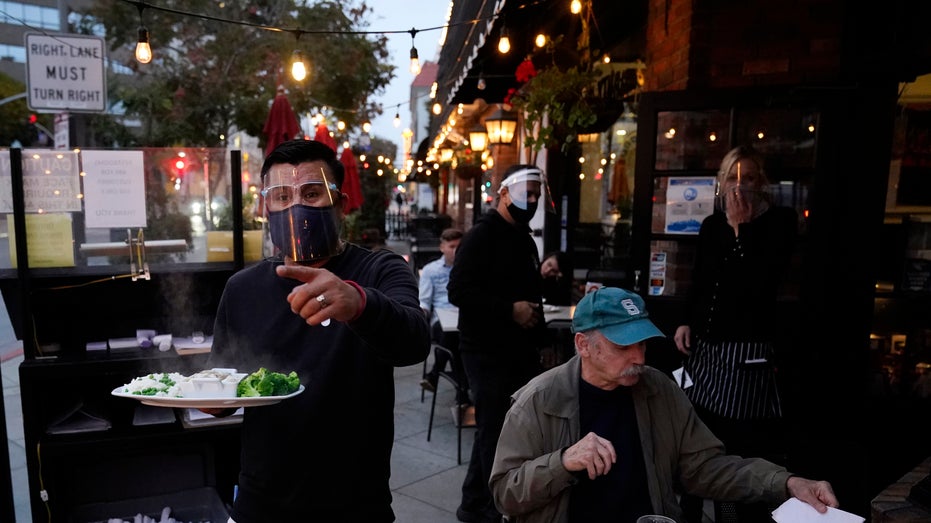 A server carries food for a customer at Ye Olde King’s Head on Thursday, Nov. 19, 2020, in Santa Monica, Calif. The British restaurant and bar in seaside Southern California has been battered the past nine months and was in the process of adapting to

The latest data comes following a new order unveiled by the Department of Public Health prohibiting outdoor dining. The modified order, which will take effect Wednesday, Nov. 25, at 10 p.m., will last for the next three weeks at a minimum.

To reduce the possibility for crowding and the potential for exposure in settings where people are not wearing their face coverings, restaurants, breweries, wineries and bars will only be able to offer takeout, drive-thru and delivery services. Wineries and breweries may continue their retail operations adhering to current protocols.

“These proposed measures by the Department of Public Health will further devastate local businesses and employees who have been asked to shoulder an unfair burden this year,” Barger said. “Businesses throughout the county have invested thousands of dollars to ensure safety for their employees and customers only to be punished for the recent surge they have done everything in their power to prevent.”

She argues that by closing restaurants that are in compliance, the county may adversely incentivize residents to host and attend more private gatherings without safety precautions in place.

“Businesses have made incredible sacrifices to align with safety protocols to remain open in order to pay their bills and feed their families,” Barger added. “Our hospitalization rates are among the lowest we’ve seen. Yet, the rationale for further closures is tied to the number of patients in the hospital. We’ve come a long way to support workers and residents who are struggling to stay afloat and should not regress on the progress we’ve made.”

She encouraged residents to help slow the spread by maintaining physical distancing and wearing face coverings.

L.A. County Supervisor Janice Hahn said she would have rather discussed the new measure openly during the Board of Supervisors’ meeting so the public could “understand the rationale behind it.”

The Department of Public Health did not immediately return FOX Business’ requests for comment.

California Congressman Doug LaMalfa told FOX Business that the government’s problem is that they are “not really applying common sense to where spreads are coming from” despite claims that they are following the science.

He argued that based on the new data from L.A. County, the new restrictions will not even achieve the county’s intended goal and that it is unfair to the businesses that will take a significant financial hit or even close down permanently because of it.

“What I would really, really recommend is to actually sit and listen and implement based on what you’re learning from what people are saying,” LaMalfa added. “It just seems like the power has gone to their heads.”

The Los Angeles Economic Development Corp. predicted that approximately 700,000 jobs in the food industry would be lost during the county’s shutdown, with 75% of all projected job losses impacting those earning $50,000 or less.

GET FOX BUSINESS ON THE GO BY CLICKING HERE