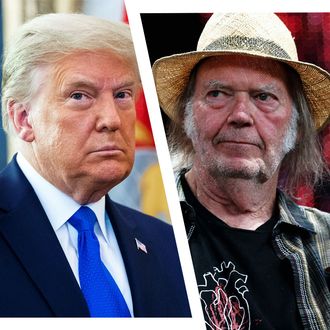 One last legal harvest before 2021: Neil Young has decided to drop his copyright infringement lawsuit against President Trump, which was filed in August after the use of “Rockin’ in the Free World” and “Devil’s Sidewalk” were repeatedly used throughout Trump’s presidential campaign trail without permission. The Guardian reports that Young voluntarily dismissed the case “with prejudice” in a New York court on December 7, which means the musician cannot bring the case to court again — although it’s possible that the duo privately settled out of court. Young and Trump, who have not commented on the lawsuit’s end, will also have to “bear their own costs, fees, and expenses.” Young, who recently obtained American citizenship, has had a prolific year of taunting and terrorizing Trump, who’s a self-declared mega fan of the Canadian crooner. In February, Young declared that the president is “a disgrace to my country,” following up in July that he failed “to save American souls” from the coronavirus. Trump responded, we imagine, by shotgunning cheeseburgers in a dark Oval Office while “Old Man” gently played in the background.