Erika Andiola (left) speaks at a press conference about immigration reform held by the Dream Action Coalition on Dec. 4, 2013 in Washington, D.C. 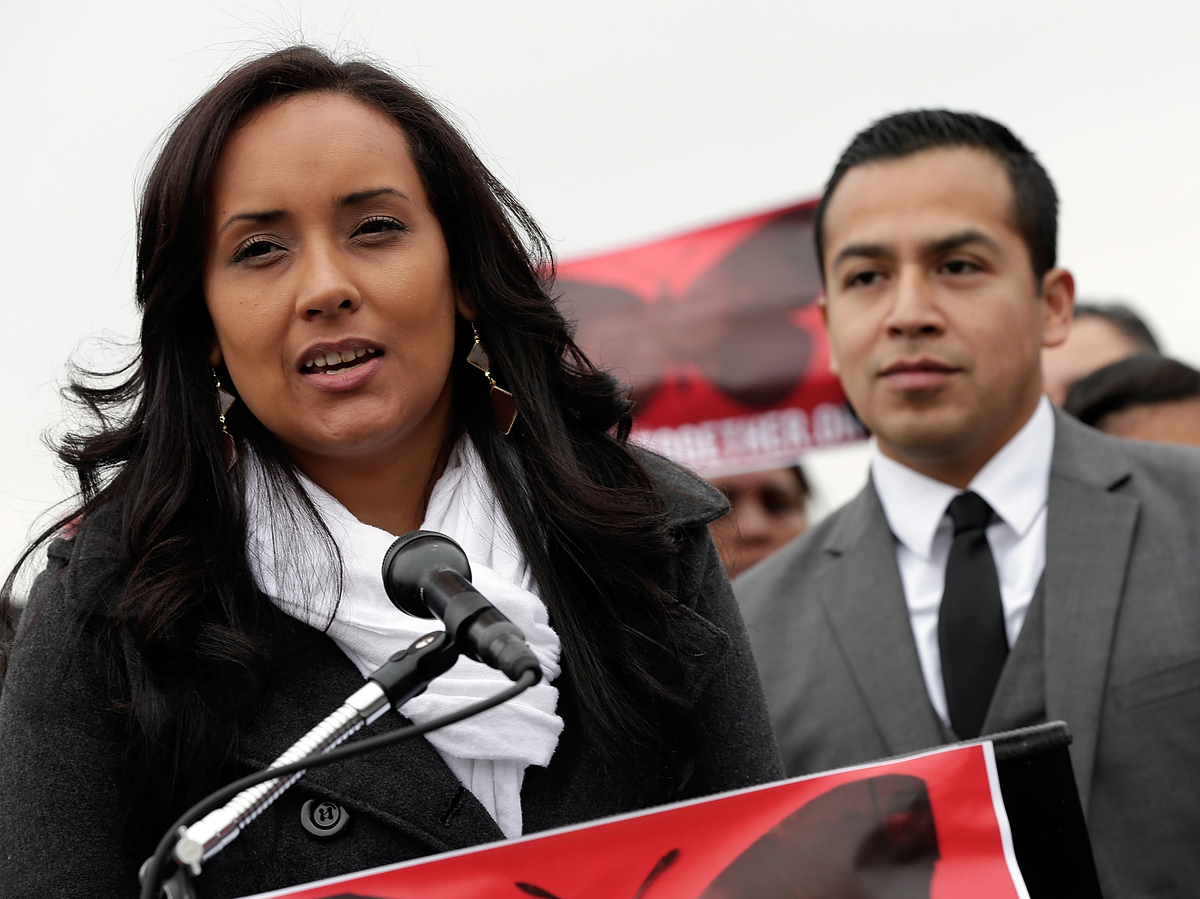 Erika Andiola (left) speaks at a press conference about immigration reform held by the Dream Action Coalition on Dec. 4, 2013 in Washington, D.C.

Immigration activists are gearing up for a fight to push President-elect Joe Biden to do more to counter the measures taken by President Trump that made life more uncomfortable for the 11 million undocumented immigrants living in the county.

But they may find they get less than they hope for from the Biden administration, which finds itself having to balance the demands of activists with the inherent limits on executive powers.

Biden pledged during his campaign to use those powers to reverse many of President Trump’s most controversial actions. His plan includes a 100-day moratorium on deportations, restoring protections for young immigrants brought to the country illegally as children, and eliminating Trump’s restrictions on asylum seekers.

But some immigrant-rights groups like the Refugee and Immigrant Center for Education and Legal Services, Movimiento Cosecha and United We Dream want more.

“We need advocates and people who wake up every day thinking about how they’re going to fix the system so that people like myself and people like my family and others who are seeking refuge here have the ability to have a better life,” said Erika Andiola, an immigrant rights activist and advocacy director for RAICES.

Recognizing that the political divide in Congress makes a major overhaul of the immigration system unlikely, the groups are pushing for Biden to use the power of his pen to take steps sooner rather than later.

We say out loud, we say it clear: DACA IS THE FLOOR, NOT THE CEILING.

We demand Abolishment of ICE and CBP.

We demand Moratorium on deportations

We demand BOLD Admin actions that protect people from deportation.

Biden transition officials did not directly address some of the activists’ demands, but said they have already had dozens of meetings with groups who are sharing their views.

Transition spokesperson Jennifer Molina said Biden is committed to ensuring his administration’s immigration policies “restore order, dignity and fairness to our system.” She cited his commitments to help those seeking asylum, reinstate DACA and introduce legislation that includes a pathway to citizenship.

“President-elect Biden is also committed to having an open dialogue with groups across a wide spectrum to ensure his administration is meeting the needs of the community,” Molina said.

While Biden promised to reverse Trump’s most restrictive immigration policies, he did not include immigration among his four top priorities: the coronavirus pandemic, economic recovery, racial equity and climate change.

That was intentional, said a person familiar with transition discussions. He told NPR that the Biden campaign and then the transition team felt that immigration activists had become too adversarial.

“There are a number of people within Team Biden who are just uncomfortable with a lot of the policy initiatives that they recommend, which is why when you saw Biden’s four core issues immigration was not one of them,” he said.

The divide between the incoming administration and activists dates back to the Obama administration when immigration-rights advocates were not happy with how former President Obama handled enforcement issues — a period where Obama had been dubbed the “deporter-in-chief” for his record on deportations.

It wasn’t until his second term that Obama shifted his focus and began prioritizing the removal of those with serious criminal records or who posed national security threats.

Reality for the party and governance is they have to balance those demands with what they can actually get done.

Biden is largely expected to go back to the priorities that were in place at the end of the Obama administration.

Theresa Cardinal Brown, the director of immigration and cross-border policy at the Bipartisan Policy Center and a former senior adviser on immigration in both the Bush and Obama administrations, says the Biden administration must be careful not to unwind Trump’s restrictions too quickly before getting their own processing system in place — or they will risk a new surge at the border.

“They can’t say, ‘Oh, wait, migrants — don’t arrive just yet. We’re not going to be nasty to you. But don’t come for another two months so we can get this in place.’ Like, that’s not how it works,” she said.

“Activists are going to be active. That’s their job. Their job is to try to push as hard as they can,” Brown says. “But reality for the party and governance is they have to balance those demands with what they can actually get done.”

But turning the clock back to the Obama years is not enough, said Bruna Sollod, communications director at United We Dream, an immigrant youth-led organization.

“When you talk to Latinx folks in states like Arizona, like there is a mandate there from this administration to go bold, to do progressive action,” she said. “It’s not to go back to what it was under Obama, because that certainly didn’t work. It’s not to keep things in the status quo. It’s to actually take action.”

More moderate groups like the National Immigration Forum support rolling back many of Trump’s executive orders but cautioned the Biden team against going too far. Executive Director Ali Noorani, who has had multiple conversations with the transition team, has urged the incoming administration to return to the priority enforcement practices of the Obama administration.

Supporters of Biden say executive orders often are only short term gains because they can be overturned by the next administration — or challenged in court.

Litigation has also become a weapon used by opponents to stop or limit policy making from the executive side. DACA, for example, faces a significant legal challenge that could lead to its end – or eliminate work authorization permissions.

A case on DACA is currently before a federal judge in Texas who has already signaled in the past that Obama exceeded his authority when he launched the program. “If the nation truly wants a DACA program,” U.S. District Judge Andrew Hanen wrote in 2018, “it is up to Congress to say so.”

Listen, I don’t know what @AliMayorkas is going to do with @DHSgov. I’m not an insider and don’t have a crystal ball. What I do know is that we can’t revert back to Obama-era policies that targeted, incarcerated, and deported our family members, friends, co-workers and neighbors.

The incoming administration is sensitive to activists’ demands. Biden nodded to the concerns when he picked the first Latino immigrant to lead the Department of Homeland Security, which oversees immigration enforcement.

Introducing Alejandro Mayorkas as his pick for Homeland Security Secretary, Biden said Mayorkas knows “we are a nation of laws and values.”

Advocates remember Mayorkas from his work crafting the DACA program. which protected hundreds of thousands of young immigrants from deportation.

In a Biden video promoting his pick, Mayorkas spoke about his Cuban heritage and his family’s migration to the United States. There was no mention of enforcement — which will be a key part of his job.

“I hope I represent for others the opportunities that this country provides to everyone based on hard work, dedication and commitment to things that matter most,” Mayorkas said.

As Secretary of Homeland Security, I hope I can represent for others the opportunities that America provides to everyone. pic.twitter.com/Kej9Nt3ZTu