The first dose of New York’s coronavirus vaccine supply went to a health care worker who spent the last 10 months working the front lines as the illness ripped through the state. The Northwell Health employee, who was the first to receive the vaccine on Monday, was identified as Sandra Lindsay, RN, a critical care nurse at Long Island Jewish Medical Center.

She was vaccinated during a Gov. Andrew Cuomo press conference on Monday, and was possibly the first to receive the jab in the U.S. She told the doctor administering the vaccine that she was feeling “great.”

Moments after the shot, President Trump tweeted that the first vaccine had been administered, but didn’t specify further.

Lindsay told Cuomo that the shot “didn’t feel any different,” from any other vaccine she had received. 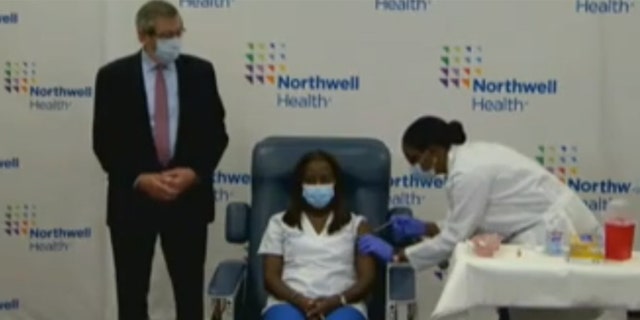 She went on to thank her colleagues in the field who have been battling the virus throughout the world.

FIRST CORONAVIRUS VACCINE DELIVERIES OUT TO ALL 50 STATES IN US

“I feel hopeful,” she said, adding that she was also “relieved.”

She said she wanted to “instill public confidence that the vaccine is safe.”

“In New York, we prioritized health care workers at the top of the list to receive the vaccine because we know that you are out there every day putting your lives in danger for the rest of us,” Cuomo said.

He added that up to 85% of the country’s population would need the vaccine for it to be effective, but it would be months before the general public saw enough supply to receive it.

“So this is the light at the end of the tunnel,” he said. “But it’s a long tunnel and we need people to continue to be doing the right thing. And the smart thing, all through the holiday season. And hopefully, when we get to about June, they estimate the vaccine can hit critical mass, but the health care workers will get it first because we know that you’re super stressed during this holiday season.”

The long-awaited moment comes just one day after workers at a Pfizer plant in Portage, Mich., loaded the first of nearly 3 million doses onto trucks to be distributed across the nation. UPS and FedEx both tweeted that the deliveries were successful.

The first shipments were said to arrive in 145 distribution centers Monday across 50 states, with an additional 425 sites getting shipments Tuesday, and the remaining 66 on Wednesday.

The vaccines will go to health care workers and residents of long-term care facilities before the country enters the next phases of distribution.