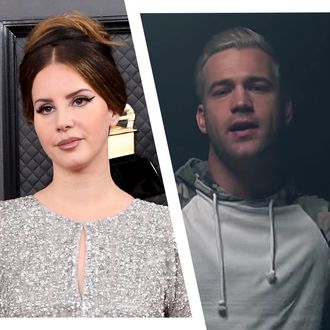 Leave it to Lana Del Rey to outdo herself after dating a cop. A source confirmed to People that Del Rey is engaged, after she wore a hefty ring during her December 14 return to late night on the Tonight Show. Her new beau? Clayton Johnson, a former singer in a YouTube cover band with his brothers. People added that 25-year-old Del Rey and 31-year-old Johnson met on a dating app, and according to the report, they began following each other on Instagram in August. Johnson has since posted photos with Del Rey to his account, along with appearing in Del Rey’s Election Night Instagram Live from Denny’s.

Johnson previously had a bit of a music career of his own in pop band the Johnsons with his two brothers, Chantry and Connor. They covered pop songs on their YouTube channel, which racked up nearly 90,000 subscribers, with the earliest video, a cover of Magic!’s “Rude,” posted in July 2014. Their most popular video is a cover of Rihanna, Paul McCartney, and Kanye West’s “FourFiveSeconds,” which has 1.5 million views. The Johnsons never covered Del Rey herself, but they covered multiple songs by her sister–in–Jack Antonoff Taylor Swift, for whatever that’s worth. (And that “New Romantics” cover is kind of fun, isn’t it?) They also released some music of their own, including the shameless SEO-grab of a song “Calvin Kleins” and “Scream,” produced by former Eve 6 drummer Tony Fagenson. Billboard called the Johnsons “seriously catchy pop music” when the outlet premiered “Scream” in 2017, which it called “an irresistible jam.” We kind of have to agree! Sadly, the Johnsons’ last song posted to YouTube was their original “Call Me Whenever” in May 2017. But hey, maybe Caleb can add some harmonies on his new fiancée’s next album?