The creature, named Zhùr by the local Tr’ondëk Hwëch’in First Nation people, was discovered in the Klondike goldfields, near Dawson City, by a gold miner, who was water blasting a wall of frozen mud.

“This mummy is so complete, she has basically got all her skin, most of her fur … all her soft tissues present, and she’s 56,000 years old, or thereabouts,” Julie Meachen, an associate professor of anatomy at Des Moines University in Iowa, told CNN.

The female pup, according to Meachen, is “the oldest, most complete wolf that’s ever been found,” allowing researchers to delve deeper into what her life would have looked like.

Using X-ray techniques, experts determined that the puppy, which had been preserved in permafrost, died at 6 or 7 weeks old.

Meanwhile, a technique called stable isotope analysis revealed that the animal lived during a time when glaciers had receded. 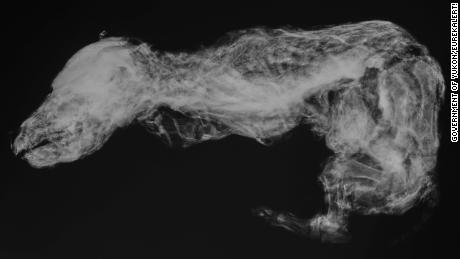 “There weren’t quite as many glaciers around, which means there was a lot more fresh water,” she said. “There were a lot of streams, a lot of rivers flowing, and probably a lot of other animals around. She lived in a lush time.”

The wolf cub’s diet, researchers found, was influenced by her proximity to water: Isotope analysis revealed “she and her mom were eating mostly aquatic resources — things like salmon, maybe some shore birds,” Meachen said.

A DNA analysis revealed the pup is descended from ancient wolves — the ancestors of modern wolves — from Russia, Siberia and Alaska. 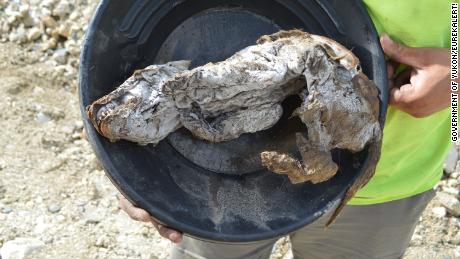 “It’s not a surprise — she is related to the things that were there at the time,” she explained. “But the cool thing about that, that most people might not know, is that wolves in the ice age were only distantly related to wolves that are around today.

“They are still the same species, but they are very different, for being in the same species. Their genetics have changed quite a bit over time — the diversity of wolf has been diminished over time, and again, expanded.

“She is truly an ancient wolf, and she was related to all the wolves around her at the time,” Meachen said.

It takes very specific circumstances to create a permafrost mummy, the researchers said, although several well preserved wolf cubs have been retrieved from Siberia. However, this cub, found in North America, was particularly rare. 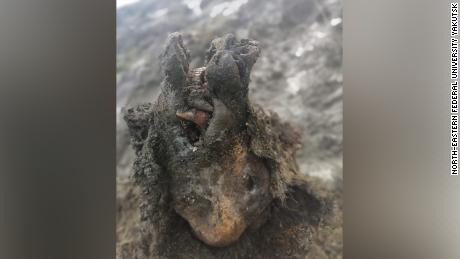 “It’s rare to find these mummies in the Yukon. The animal has to die in a permafrost location, where the ground is frozen all the time, and they have to get buried very quickly, like any other fossilization process,” Meachen said in a statement. “If it lays out on the frozen tundra too long it’ll decompose or get eaten.”

Because of her “pristine” condition, experts think that the wolf cub died instantaneously, perhaps when her den collapsed, as data showed she didn’t starve.

The research was published Monday in the journal Current Biology.