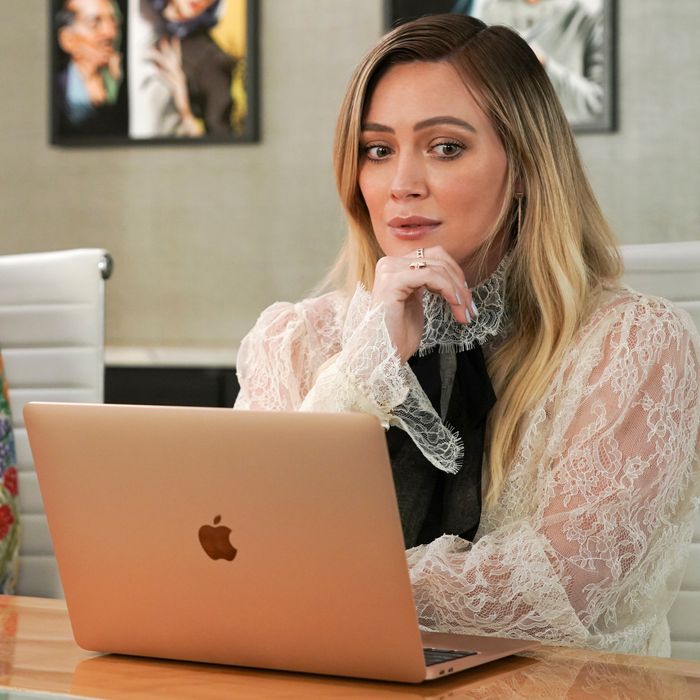 Younger is officially old news, with the rom-comedy concluding its underwhelming seventh and final season by giving our extended Empirical family some closure. (Well, everyone but our head of marketing fish icon, but we digress. Actually — we won’t digress on this! We could probably write 1,000 words about how Diana Trout should’ve appeared, and how much of a travesty it is that she didn’t. Whatever. Let’s try to continue.) Liza is the new HBIC; Kelsey is, too, but moving out to another coast for an exciting gig. Lauren is very Lauren; Maggie is very Maggie. And as for that simmering love triangle with Josh and Charles? A victor has seemingly been crowned in a Williamsburg dive bar.

But in the case of series finale “Older,” the closure these characters are given opens up a lot more questions about the decisions that led them there, and where they might go next. We’ll miss this fun little show dearly despite its later missteps, and we’re going to continue pondering what could have been.

Most would argue that Younger’s true love story was the friendship shared between Liza and Kelsey, but, of course, the romantic love triangle is what gave the show its very addictive, very horny spark: Liza, Charles, and Josh allegiances have been dividing viewers since the first episode, with the finale’s last scene mirroring Liza and Josh’s initial bar encounter that started the show’s premise as we know it. However, the crucial difference is that Liza has split from Charles and is now very much single. Could her future indeed include Josh, his baby girl, and a happy blended family? “You know what?” Josh tells her. “I’ve been right here by your side all along.” That sounds pretty inviting if you ask us. Now kiss!

The couple, continually plagued by their fear and loathing of secrets, end their relationship not with an implosion, but rather a mature cuddling session in bed. (“Hey,” Liza finally offers, “we’re not gonna make it, are we?”) Given that Charles has spent the better part of the season being a dick who quickly moved on with another woman, no, we’re not surprised by the split, and double no, we don’t think they could’ve made it.

With Charles off to his prestigious writers’ program to finish The Miseducation of Henry Cane, and Kelsey moving out West to pursue her new Inkubator career, Liza assumes that Charles wants her to tender a resignation after their breakup. Actually, the opposite happens, much to the relieved sighs of HR: He offers Liza his job as Empirical’s editor-in-chief until he wraps up the book (“maybe longer, depending on how things go”), culminating a wildly bumpy career journey that’s been seven years in the making for her. “You’ve spent enough years looking over other writers’ shoulders,” Charles tells Liza, “you don’t think it’s too late to start a second career, do you?” Of course not. She accepts, which is a great choice — she has no other job prospects, as the Inkubator job offer was technically only offered to Kelsey. Which reminds us …

As has been teased for over a year at this point, Duff’s character, Kelsey, could be on the receiving end of her own spinoff, confirming her Rhoda status within the Younger universe. The finale gives us a little more clarity on what it would look like: Hello Sunshine, Reese Witherspoon’s real-life media company, invests in Inkubator, and our gal is moving out to Los Angeles to get it up and running. Showrunner Darren Star has previously teased that a Kelsey spinoff would be like a “female Entourage” and set in a “totally new universe.” But, heartbreak: On June 10, Star clarified that the spinoff is “pretty much off the table,” perhaps because Duff is currently committed to a How I Met Your Mother sequel series at Hulu. Either way, she got the money, honey!

Yes. Josh, who’s now apparently super-rich, will be a good landlord. Owning a whole entire building in Williamsburg! Our boy has grown so much.

The look on Kelsey’s face initially seemed like “hello, good friend and necklace legend” and not “hello, Miss Draper James.”

We haven’t been this pissed about a lack of a finale appearance since Bulldog skipped out on Frasier’s last broadcast. Was another FaceTime call too difficult? A congratulatory necklace delivery? Something? ANYTHING?

Because, just saying, we think there’s something there.